Mr Grant is a speaker and consultant in nuclear safety and regulation.

He was the Deputy Director General for Operations at the Federal Authority for Nuclear Regulation in Abu Dhabi from 2016 to 2018 and the Director of Nuclear Safety at FANR from 2009 to 2015. He played a leading role in establishing FANR as the new national nuclear regulatory body in the United Arab Emirates in particular directing the development of regulations and guides, licensing, and inspection of the construction and commissioning of the 4-unit nuclear power plant at Barakah in the UAE.

Before joining FANR, Ian held senior management roles with the Canadian Nuclear Safety Commission with responsibilities for licensing and safety assessment of the fleet of operating nuclear power plants in Canada. He joined Atomic Energy of Canada Limited in 1980 after beginning his career with Babcock and Wilcox in the United Kingdom in 1975.

Ian is an invited contributor to several International Atomic Energy Agency (IAEA) peer review missions, has led and participated in national delegations to four review meetings of the Convention on Nuclear Safety, and has served on the IAEA Nuclear Safety Standards Committee and on the OECD Nuclear Energy Agency committees for nuclear safety and regulation. 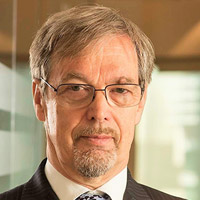